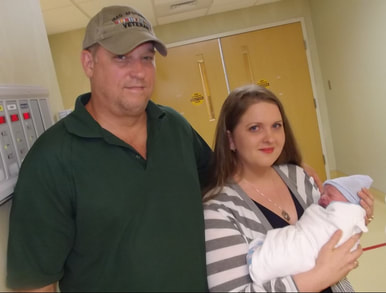 This week’s CHEER Champion of the Week is Talita Ruble, a mother who persevered in breastfeeding her adopted son, Ronin! Talita’s story is truly remarkable and a testament to a mother’s determination and the support of her community, including CHAMPS hospital King’s Daughters Medical Center (KDMC) in Brookhaven, Mississippi.

In January 2018, Talita and her husband met with Ronin’s birth mother for the first time, who asked them in that meeting to be the parents of her baby, who would be born on June 25th. Soon after that meeting, Talita decided to induce lactation. She had heard about induced lactation years before from some ladies in a Catholic infertility support group, who were discussing the article, “How and Why I Induced Lactation,” by Amanda Teixeira. Although Talita and her husband were not pursuing adoption at that time, Talita saved the link to that article. After meeting with Ronin’s birth mother, she reread the article and did more research.

“The more I researched it, the more convinced I became that the benefits were worth the effort of inducing lactation,” Talita says.

Talita knew her road would not be easy. Induced lactation involves a lot of time pumping with varying results. Yet Talita countered this challenge with realistic goals and beautiful definitions of success.

Talita shares: “I pumped for months with nothing but drops not even big enough to save. When it did start, it took a week to get an ounce, then finally 2 days, then 1 day. By June 25th, I was at 3 ounces per day. Unfortunately, my supply never increased. However, I did it, and my goal was to be able to nurse Ronin within 1 hour of birth. Thanks to his birth mom and the hospital staff at KDMC, we did it. Then the most vital goal, nurse him through withdrawals. We made it! Five days of delirium tremens and he was tremor free. After day 5 I had to start supplementing. Luckily, since I started producing a month before he was born, I had a small stash of frozen milk.”

Talita credits her success to her various sources of support. She says her husband was her “champion,” and that when she grew tired of pumping and support was hard to find, he kept her focused and reminded her that “every drop mattered.” KDMC Lactation Nurse Lou Ann Wall, RN, IBCLC helped Talita during the induction stage before Ronin was born, during Ronin’s hospital stay, and after discharge when Talita had to start supplementing.

“Thanks to the hospital and Ronin’s birth mom, my husband and I were able to room-in with Ronin,” says Talita. “Once we were back in our own room with the baby, Lou Ann helped me get Ronin latched for the first time and checked in on us regularly.”

Talita and her husband’s room was next door to Ronin’s birth mom’s room. Ronin was put into Talita’s arms outside the operating room door, and she and her husband were able to spend every moment with him from then on, including during a short visit to the nursery for vitals and a short visit to the birth mother’s room for her to see him. Talita is grateful for this unique opportunity for an adoptive mother to have a private room to do skin-to-skin and nurse from the moment of birth.

Talita is also thankful for the support she received from Circle of Moms Baby Café in Brookhaven. She started attending their weekly meetings while still pumping and awaiting Ronin’s arrival. She says the ladies there “cheered her on” through her whole journey and helped normalize breastfeeding for Talita, who had not been around any breastfeeding moms before. Talita perceives more moms in Mississippi talking about and practicing breastfeeding especially in the last few years.

Ronin is 5 months old now and “growing like a weed!” says Talita.

Congratulations, Talita, on your amazing journey, and best wishes to you and your family!