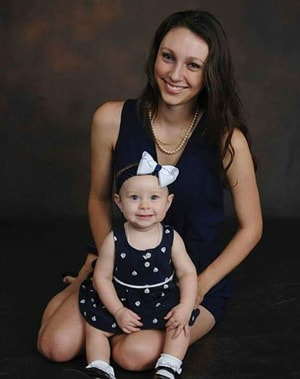 Congratulations to our newest CHAMPion(s) of the Week, Sophia and Stephanie Glenn! Stephanie Glenn is a 22 year old mother from New Orleans, Louisiana, who has exclusively breastfed her daughter Sophia for 9 months with no plans to stop. Stephanie delivered her daughter Sophia at CHAMPS-Enrolled Hospital West Jefferson Medical Center, from whom she has received much support as she continues to breastfeed her daughter.
Stephanie is passionate about providing the best possible nutrition for her daughter, and she isn’t afraid to share this with the world. Stephanie has posted #brelfies (breastfeeding selfies) to her social media accounts in an attempt to “#normalizebreastfeeding”, but many social media users have reported her photos as inappropriate due to Nudity. Fortunately, some websites such as Facebook have recently changed their policy on breastfeeding photos, and none of her photos were removed because they did not violate community standards. Stephanie has inspired so many of her friends to breastfeed their children, and Stephanie and Sophia were recently chosen to be featured on a National Breastfeeding Poster.
Stephanie follows in the footsteps of her mother Mindy Glenn, RN, CLC, CPST, LLL, LCCE, who breastfed both Stephanie and Stephanie’s sister Macy. Mindy is currently the NICU Discharge Planner at West Jefferson Medical Center. She is also a Certified Lactation Counselor, La Leche League Leader, a Lamaze Certified Childbirth Educator, and a recurring speaker for the Annual La Leche League Breastfeeding: The Gold Standard Conference.
Stephanie and Sophia’s story exemplifies the success stories of other proud mothers in our CHAMPS Enrolled Hospitals who break cultural barriers and persevere to give their children the best possible nutrition. Congratulations Stephanie and Sophia, you are true CHAMPions!