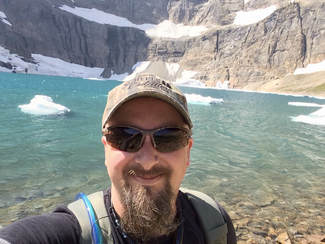 This week’s CHEER Champion of the Week is Pastor Joel Toppen, Lead Pastor at Four Winds Assembly of God Church in Browning, Montana and Spiritual Advisor for the Silent Warriors Coalition, a group of community members dedicated to fighting drug and alcohol abuse in Blackfeet Nation. Pastor Joel is also a member of the Opioid Prevention Taskforce (OPT) in Blackfeet, and his church offers meeting space for the Silent Warriors and weekly support groups for men and women, many of whom struggle with addiction.
“I wear a number of hats in the community,” shares Pastor Joel. “Several people in my congregation are in the Silent Warriors, and that’s the primary reason I got involved with that group and the OPT. As a pastor, I deal with the same issues as people in healthcare. I try to be involved in whatever I can to bless the community.”

CHEER facilitates the OPT, which is working towards establishing a medication assisted therapy (MAT) clinic on the Blackfeet Reservation. The Blackfeet Tribe, Tribal Health, the Indian Health Service Blackfeet Community Hospital, the Silent Warriors, and many other community groups, with CHEER’s technical assistance, aim to launch the clinic in the coming year at the Southern Peigan Health Center in Browning, Montana. Initially, the MAT clinic will be for mothers with opiate addictions, but eventually plans to expand services to a larger population.
Pastor Joel has offered his unwavering support for the MAT since the OPT first started. He says the reason he does has to do with the Lummi Tribe in Washington and how he and others from Blackfeet saw a MAT clinic working successfully there. Lummi’s model involves a lot of follow-up and regulation, a different approach than prescribing medication for extended periods of time without contact throughout that time.

“I envision a MAT clinic on Blackfeet doing it properly,” says Pastor Joel. “More hands-on with dosage and people ready to council. And to recognize when someone is not in a good place. Instead of just treating the addiction, we need to ask why they are going to drugs. Merging with mental health is where we need to go with this.”
Currently, Blackfeet does not have an outpatient opioid-replacement therapy program and people travel to other cities in the Northwest for treatment. Ideally, Pastor Joel sees the MAT clinic as a core component of a multi-faceted drug addiction program on Blackfeet. Such a program, says Pastor Joel, would “holistically treat families” and teach people how to “cope and do life skills.” Having a local program would also allow families to remain together while getting treatment and reduce the risk of foster care, he says.

Pastor Joel lived on the edge of Navajo Nation for 24 years before he moved to Blackfeet in 2015. His wife, Erica, volunteers at the church and offers individual counseling to those in their church community, many of whom have been affected by substance abuse, domestic violence, or both.

Congratulations, Pastor Joel, and thank you for everything you do!