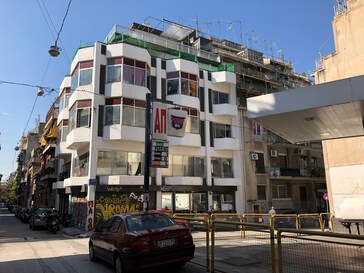 The Elna Maternity Center, which shelters pregnant women and families with infants and children in central Athens, Greece, is today’s CHEER Champion of the Week! Elna became an independent non-profit on May 1st, 2019, but had already been housing refugees for a year in their current location, which is down the street from the CHEERing (CHEER in Greece) office.

CHEERing works closely with Elna, visiting at least once a week to support breastfeeding and check in on infant feeding and growth, as well as providing support-based education, and liaising with Medical Volunteers International who also visit Elna weekly..

Elna is unique in Athens for accepting pregnant women and children as residents. Their small, multi-story apartment building has space for 20 families in separate rooms, and usually houses about 60 people, most of them children. At the time of writing they are home to 2 pregnant women and 8 infants aged around 6 months or younger. Families come from many nations but most refugees are from Afghanistan, the Congo, or Syria. Apart from housing, the volunteers at Elna also accompany the residents for medical checks at the public hospitals, for the asylum process at various public services, and in general help the residents in the process of integration into the Greek society with language lessons and support with paperwork.

Carlos, who runs Elna along with long-term volunteers Isabel and Zourine, is a Spanish film maker who has also lived in New York. He wasn’t planning to open a shelter when he came to Athens for work, but ended up staying.

“What else can you do?” he asks. “If governments would do what they are obliged to do, we wouldn’t be here, but they don’t. Europeans and others are all responsible. Their governments sell weapons, and wars follow, and we are the people who put them into power. And then, Europe closes its borders. We cannot follow like lambs. We are all human beings. We all have to fight for everyone’s human rights.”

Taking on pregnant women, infants, and children is particularly strenuous. Elna is filled with dozens of small children and keeping them busy, happy, and healthy takes long hours of dedication and patience. Most families have suffered major trauma. Throughout the day, families cook, work, and feed their babies! The shelter recently started a roof garden with herbs and vegetables.

Elna is named after the Elna Maternity Home, founded by Elisabeth Eidenbenz, a young Swiss teacher who helped refugees during the Spanish Civil War and the following Second World War in France. The crisis, and dangerous circumstances for pregnant women and newborns, inspired her to convert an abandoned mansion in the small town of Elne in the south of France into a maternity home, which saved an estimated 400 Spanish children and 200 Jews from the Nazi regime during the War.

Carlos and his team believes that they cope because “We talk a lot, and we help each other a lot!”

CHEERing is proud to collaborate with Elna Maternity Home, congratulates them, and offers onsite encouragement for them to keep up their tireless work.