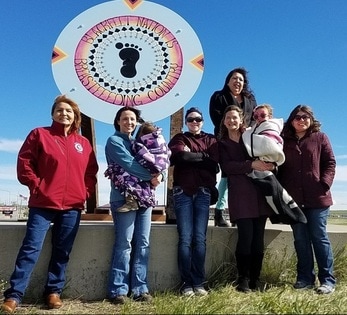 This week’s CHAMPion of the Week is Blackfeet Nation’s Community Breastfeeding Team, for its inspiring steps towards making Blackfeet Nation a breastfeeding-friendly community! CHEER’s American Indian/Alaska Native CHAMPS program (AI/AN CHAMPS) works with tribes and hospitals across the US to improve breastfeeding support in AI/AN communities.

The Community Breastfeeding Team’s main vision is to create a “Poka-Friendly Community.” (Poka means “child” in the Blackfeet language.) The Team identified several practices that communities can do to embrace breastfeeding. One of those practices is a public declaration of the community’s support for breastfeeding through signage.

On Mother’s Day 2017, the Team unveiled the first of 3 large road signs stating, “Blackfeet Nation is Breastfeeding Country,” with a ceremony in Browning, Montana, the capital of Blackfeet Nation. The ceremony included a welcome by Rosemary Cree Medicine, Director of Blackfeet Nation’s Tribal Health Department; an overview of the project by Kirsten Krane, AI/AN CHAMPS Project Manager; a prayer by Cinda Burd, AI/AN CHAMPS Consultant; and a plug on the Water Initiative by Stefany Jones, Public Health Nutritionist. A rose was given to each woman who attended. The ceremony concluded with a dramatic unveiling of the sign, cheered on by all present. A special thanks to Blackfeet Academy for having their students pick up garbage at the site, and to the Blackfeet Hot Shots and Land Department for assisting with the erecting of the signs.

The signs, funded by AI/AN CHAMPS, were made and hand-painted by local artist, Mark Winters, on 6-foot diameter steel discs mounted onto railroad ties using a marine-grade primer and oil-based paints. Weighing around 1300 lbs. each, the signs were designed to be “as sturdy and permanent as possible,” and to withstand the strong winds on the eastern front of the Rockies. All 3 signs will be strategically placed within the Blackfeet Reservation (one right in the middle of Browning; another where the road enters  Browning from the west; another just outside of Browning to the north).

Mark shares, “I think the signs are a great idea. It’s a great community awareness project. This is a community that needs positivity. When people first come into town, they will be able to see a bright positive message.”

Mark and the Community Breastfeeding Team brainstormed design ideas together, and the Team picked the final design, an eye-catching combination of traditional indigenous symbols and colors.

“I wanted people to be able to look at the signs and take in the message but not run off the road,” says Mark, “Something simple and not too distracting. I also wanted something hand-painted, not something made on a computer. I wanted it to have a human touch.”

​“The medallion is a traditional shape, like the top of a drum,” explains Mark. “The triangular mountains are also traditional. The ring of 32 eagle feathers is taken from the Blackfeet Nation flag, and symbolizes the Tribe creating a circle of protection around babies. The foot in the middle is a universal symbol for babies.” The concentric rings, colored blue for the sky from the Blackfeet Nation flag and various sunset colors, “draw the eye towards the center.”

​The Poka-Friendly Community project is also working toward establishing employee breastfeeding policies and spaces, training healthcare workers in breastfeeding support, and assisting the Blackfeet Community Hospital with maintaining Baby-Friendly status. The “Breastfeeding in the Workplace” policy for employees was successfully adopted by the Browning Public School District on May 25, 2016.

Rosemary Cree Medicine feels proud of the work being done—of the signs and the fact that nurses are talking to new moms about breastfeeding as a traditional practice passed down by their ancestors.

“It’s important for the new moms to learn all about breastfeeding and how it will help their babies,” shares Rosemary. “[The Poka-Friendly Community project] is about bringing up healthier kids and babies. And for me, anybody healthy—whether child or adult—I’m all for it, because I’m all for health.” 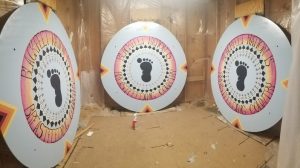