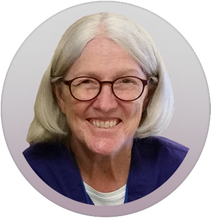 ​CAPT Suzan “Sue” Murphy, RD, MPH, IBCLC passed away on March 14, 2016. She was known and beloved by the breastfeeding community across the USA, and was long identified as the ultimate breastfeeding champion and mentor at the Indian Health Service (IHS), where she served for much of her life in the Phoenix, Arizona area.
Sue was a Captain and Public Health Nutritionist for the US Public Health Service Commissioned Corps. She served in the Commissioned Corps for 22 years at Phoenix Indian Medical Center (PIMC), 17 of those years in the area of breastfeeding support. Most recently at PIMC, she was the Breastfeeding Support Program Coordinator for the Women & Infant Service Line and ran the only IHS breastfeeding hotline in the nation. Sue was the Baby-Friendly lead at PIMC until her death. In 2013, PIMC was the first multi-bed hospital in Arizona to be Baby-Friendly designated, and Sue worked tirelessly not only for PIMC to become Baby-Friendly, but to serve as a mentor and supporter across the system, as all of IHS’ obstetrics facilities became Baby-Friendly by November 2014.
CHAMPS Director Anne Merewood, PhD, MPH, IBCLC, who served as Baby-Friendly consultant to the IHS and knew Sue well, asked her not long before her death about some of her favorite moments during the IHS’ Baby-Friendly journey.
Sue confided, “All those things I have been saying for years – suddenly, it was on the screen in a training course [for IHS nurses] and it became gospel! No one quite said you were right all along, but I was internally grateful. I thanked IHS HQ and Mrs. Obama for prioritizing this. It was great professional validation.”
When asked about her favorite part of Baby-Friendly, Sue cited her patients. “The best part was seeing moms come back successful – saying to them, don’t I know you from somewhere? And they say, yes, you helped me with this guy, and I breastfed for 15 months!”
Anne adds, “Sue was the stalwart and original protector and supporter of breastfeeding at IHS long before any of the rest of us jumped in, and we were all honored to help Sue realize her dream when all of IHS became Baby-Friendly.” 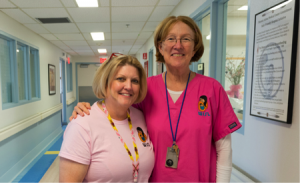 FROM LEFT: CAPT KIMBERLY COUCH, DNP, CNM, FNP, PIMC WOMEN & INFANTS SERVICE LINE DIRECTOR; CAPT SUE MURPHY
Sue’s other professional contributions include her work with the Office on Women’s Health to create An Easy Guide to Breastfeeding for American Indian and Alaska Native Families; her speaking appearances in Washington, DC and at Arizona State University on breastfeeding and its impact on diabetes and obesity; and her work as a dietician at the IHS Diabetes Center of Excellence and the Federal Bureau of Prisons.
Those who knew and worked with Sue remember her positivity, humor, kindness, integrity, and selfless compassion. Friend and colleague Kimberly Moore-Salas, IBCLC says she made the moms who were struggling with breastfeeding, in life or with drug use feel just as good as the mom who was doing well in life and with breastfeeding. She was a cheerleader at heart and celebrated any accomplishment, no matter how small. She allowed mothers to make their own breastfeeding decisions and goals and supported them in those decisions and goals. “You’re on your way!” she would often say, and “Any breastfeeding is good breastfeeding” and “You’re doing a great job, Mom.”

Those who are interested in making a donation in memory of Sue, can do so at the PIMC Auxiliary fund. Sue’s obituary can be read here. CHAMPS will present a tribute to Sue Murphy, with the opportunity for individual memories to be shared, at the Indian Country Breastfeeds conference in Albuquerque on May 9 and 10, 2016.

Note: This post has been transferred from CHAMPSbreastfeed.org.  There were originally 2 comments.  You can view them in this document.  More about Sue can be found on this tribute page.