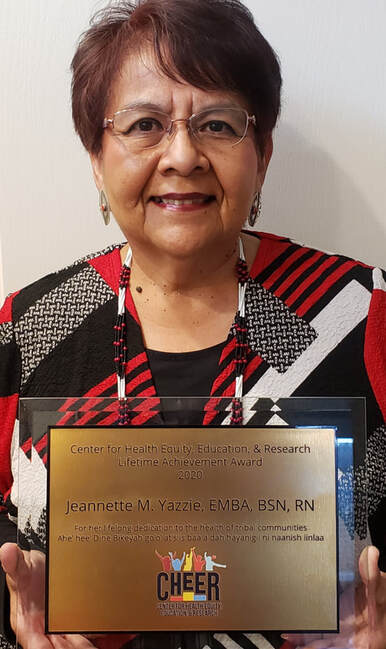 CHEER is honored to announce Jeannette M. Yazzie, EMBA, BSN, RN as our 2020 Lifetime Achievement Award Recipient. Originally from Lukachukai, AZ, Jeannette is the recently retired Nurse Consultant/Chief Nurse for the Indian Health Service (IHS) – Navajo Area and a member of the Navajo Tribe. We celebrate her for dedicating 37 years of service to improving the health of tribal communities.

Jeannette’s wealth of knowledge and experience working in the hospital, outpatient clinic, and the community settings, as well as support from her colleagues, led to her 2006 selection as the Nurse Consultant for the Navajo Area. In her capacity as the Area Nurse Consultant, she spearheaded the Baby-Friendly Hospital Initiative (BFHI) in the Navajo Area, oversaw all the nurses on the Navajo Nation, and served as the Public Health Nurse Liaison, the Area Office Coordinator for the Community Health Representatives and workers, and Area Nurse Recruiter.

”In the past, breastfeeding was the traditional norm for the Navajo infants,” says Jeannette. “There was no question that infants would be breastfed, then formula was introduced. Formula was freely dispersed, advertised as the “food of choice” for newborns and convenient. This greatly decreased the need for mothers to breastfeed. When Baby-Friendly was introduced on the Navajo Nation, it was a “gift” reintroduced to those who desired to breastfeed along with the support. Once I learned what Baby-Friendly was about, and that breastfeeding was a means of decreasing diabetes and obesity, I knew I had to make a commitment to getting this message to the mothers-to-be along with the healthcare staff. Diabetes and obesity are chronic diseases that affect many people here on the Navajo Nation.”

The Indian Health Service began implementing the BFHI in 2011 as part of the First Lady’s “Let’s Move! In Indian Country” Initiative. This resulted in all 13 federally operated IHS birthing hospitals (including all the hospitals on Navajo) becoming Baby-Friendly designated, as well as three of the four tribally managed hospitals, including two on Navajo. In addition to spearheading the initiative in her role as the Area Nurse Consultant, Jeannette chaired the Navajo Area Baby-Friendly Task Force, which included members of the Zuni and Hopi tribes.

Even though the Baby-Friendly process took a lot of time and effort initially, Jeannette found the outcome fulfilling. “Along with the education and engaging of healthcare staff, there were numerous assessments, reviews, teachings, meetings, etc., during the initial introduction and Baby-Friendly certification,” she reflects. “What an honor to know that many more babies on the Navajo Nation today have a better start in life because mothers are enabled to breastfeed their babies!” She described her role in the IHS Baby-Friendly Initiative as “the most rewarding achievement” of her career.

Jeannette graduated from Loma Linda University in 1995 with her baccalaureate degree in Nursing (BSN) and obtained her Master of Business Administration (Executive) degree from Grand Canyon University in 2010. She was a practicing nurse for 40 years and spent 37 of those years working for the IHS. During this time, she acquired a diverse range of professional skills and experiences, which all culminated in her 14 years of work on Navajo.

Jeannette started her IHS career in Tuba City, AZ after which she accepted a position in Yakima, Washington, working with the Yakima Indians. From there, she became the Assistant Director of Nursing at Whiteriver IHS hospital on the White Mountain Apache reservation, where she worked for a few years before taking a the Nursing Management and Program Analyst position at the Phoenix Indian Medical Center in Phoenix, AZ. She also worked at the Phoenix Area office as the Regional Nurse Recruiter. After Phoenix, Jeannette went on to work for the Aberdeen Area office in South Dakota for a couple of years, before returning to the Navajo Nation to serve as the Area Nurse consultant in 2006. 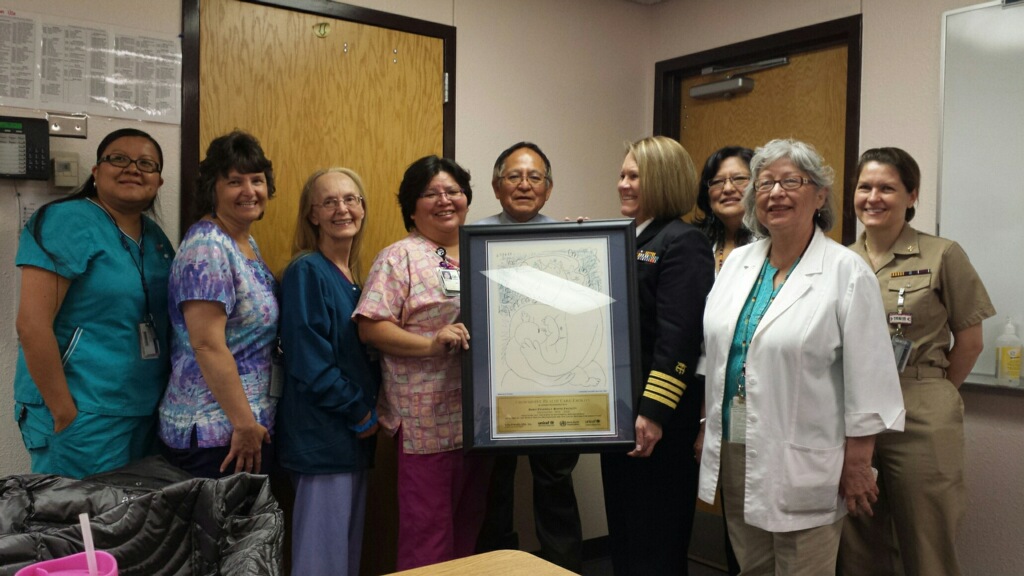 JEANNETTE AND THE STAFF AT THE CROWPOINT IHS HOSPITAL, INCLUDING FORMER CEO, ANSLEM ROANHORSE

When asked what she enjoyed most about her work with the IHS, Jeannette described that she took great joy in interacting with the nursing staff, individually and collectively, and in witnessing their commitment and dedication to the patients they served. She is glad to have been available to encourage, support, and inform others of the immense rewards of a nursing career.

“I would hope that one day, the Navajo people would be less affected by the disease of diabetes and obesity, especially the babies and moms that choose to breastfeed. My vision is to have more Navajos enter into the nursing profession or even to choose a healthcare profession so they can serve and care for our people.” – Jeannette Yazzie, eMBA, BSN, RN

According to Jeannette, some of her other memorable accomplishments include reorganizing the outpatient clinic in Tuba City to enable more efficient and faster patient flow, assisting the clinic staff at the Samuel Simmonds Memorial Hospital in Utqiagvik (Barrow), Alaska, on a short term assignment as they prepared for their hospital accreditation survey, helping out at the Tsehootsooi Medical Center (formerly Fort Defiance Indian Hospital) during the Hantavirus outbreak, promoting IHS nursing across the country as a recruiter, and assisting the Aberdeen Area, several IHS hospitals in the Phoenix and Navajo Area to become engaged in the Vermont Nursing Internship Program (VNIP) and to provide career advancement opportunities for nurses.
​
Congratulations Jeannette, we thank you for your lifelong dedication to the health of tribal communities!